In a DAB Single Frequency Network (SFN) "TII Collisions" might be generated by two or more contributing transmitters having the same Sub Id but different Main Ids. In part I of this tutorial, we have seen what the Null Symbol is and how TII Codes are decoded from the Null Symbol. We also learnt why colliding TII Codes cannot be unambiguously resolved.
In this second part we will see how we are able to identify TII Collisions in QIRX, and how to apply the available methods to resolve them.
Remark: In case you are less interested in the details presented here (what I would regret), but more in a concise instruction list which steps are ncessary to resolve a TII collision, please continue directly here in the summary.

A Suspicious Spectrum
Please have a look at the following picture, showing the TII spectrum of the Ensemble "DAB Austria". The decoder detected a mux with a MainId/SubId of 1/4. The corresponding carriers are painted in blue color in the spectrum.

However, this spectrum looks suspicious in several ways:

This "smells" of a TII Collision.

Identifying the Collision
How can we find out whether we have here a TII Collision? If you remember Part I of this tutorial, such a case happens if there are at least two transmitters having in their TII Code different Main Ids, sharing the same Sub Id. From a technical point of view this is the case when not exactly four carrier-pairs are present in one compartment of eight blocks, but five or more having identical Sub Ids. We can easily find out if this is the case in the above spectrum by zooming into it and check the Sub Ids of the carriers by hovering with the mouse over them and inspecting the tooltip.

The information in the tooltip shows a Sub Id of 1, belonging to the strong grayed carrier to the left of the yellow box. Repeating this for the other unresolved carriers, we find out that all five show a Sub Id of 1, confirming the TII Collision. But what to do with this information?

Resolving the Collision?
QIRX definitely is not able to resolve the collision by itself. It might be able to help you though. In a first step, you could activate the checkbox "Show Collisions for Sub Id 1", after having selected a "1" in the corresponding combo box.

You might remember that we found out in Part I of this tutorial that - having five instead of the four required carriers for an unambiguous identification - we expect a maximum of five transmitters forming our five possible carriers of the collision. QIRX will be happy to show these if you bother to activate the checkbox shown in the last picture. Here is the result:

The list shows all five TII Codes with a Sub Id of 1, as expected. The carriers area all painted in blue, meaning that our assumption was right that they all contribute to the colliding TII Codes. If you want, you can select only one checkbox in the TII List and see which carrier combination contributes to that TII Code. The next picture shows the carrier combination of the TII Code 2/1, as an example:

One carrier within the groups of five carriers with Sub Id of "1" is grayed, it is the one not necessary for Code 2/1.

Caveat
The important point with this whole procedure is that it might be tempting to accept the result shown in the TII list and the map and assume that for every TII Code a corresponding transmitter is located somewhere being actually received. Neither it is necessary that a transmitter with a colliding TII Code exists nor that one is actually received. Please DO NOT fall into this trap, as it would be fundamentally wrong, regardless whether a transmitter for an offending TII code is already present in the database (thus showing up on the map as a consequence) or not. In most cases this will not be true. What is definitely true is that there are at least two received transmitters somewhere out there, both having a TII code with Sub Id of 1 and different Main Ids. It might be three, four or five, but this information cannot be obtained from the list. So unfortunately the question remains:

How Can the Puzzle be Solved?
This is the problem of you, the user. But don't despair, there are some strong facts you might wish to exploit.

The Whole Picture
Now, as we have filled our toolbox with TII List, TII Carrier spectrum, CIR Spectrum and the Map, we should have a good chance to finally solve the puzzle. The next picture shows the whole situation. Let us continue our detective work. 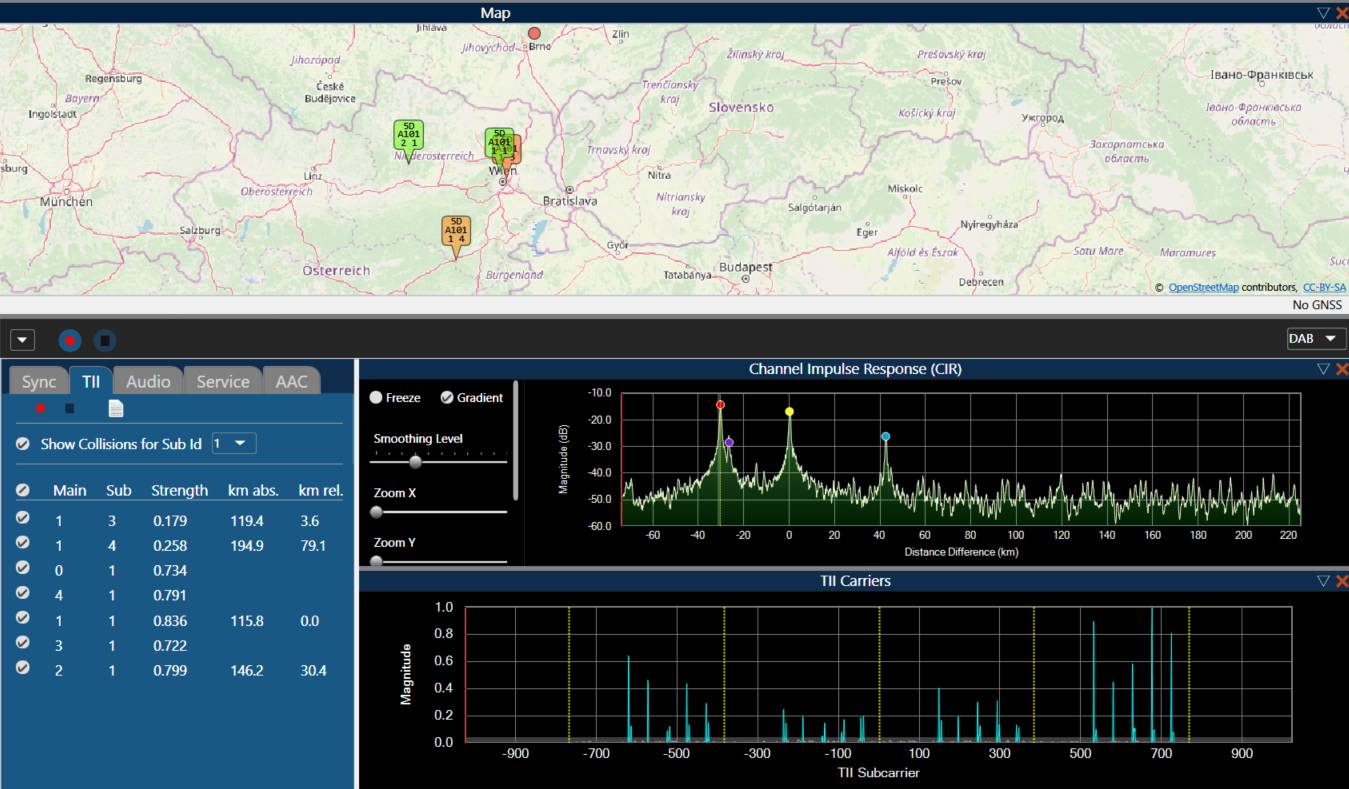 These findings present strong arguments leading us to the final conclusion that the colliding transmitters are the ones with TII Codes 1/1 and 2/1. We exclude the theoretical possible transmitters with TII Codes 0/1, 3/1 and 4/1. These conclusions are based on our above investigations.
Our goal was to resolve the TII Collision. Puzzle solved. Mission accomplished.


Here I present a compact list of the steps which are needed to resolve a TII Collision with the currently available possibilities in QIRX.


Thanks a lot to Petr, OK2HF, who provided the raw data for this investigation.