Important remark for all users only reading headlines:

(for whatever reason, other readers please skip)

If you intend to use the ADS-B decoder to show airplanes on the map, you MUST select a sampling rate of 2000000 in the Settings of that receiver, otherwise the ADS-B will not work! The ADS-B will currently NOT work with the Airspy R2.

Each of the QIRX receivers ("Frontends") processes data arriving on the TCP/IP network. If you want to understand and use the various Setup scenarios of QIRX you need at least a very basic knowledge how TCP/IP works. . In the following I assume you understand the term "TCP/IP socket", "Dotted IP Address" and "Port Number". This is the whole vocabulary you need to know. As TCP/IP is at the heart of the Internet, understanding these terms will help you also in a better understanding of the Internet.

Remark: Working with TCP/IP does NOT mean that you need to connect to other computers. Each computer has its "built-in" TCP/IP network called the "localhost". QIRX is perfectly able to work with the localhost only, although a "real" network is advantageous in many cases.

Receiver hardware like rtl-sdr dongles are usually connected to a USB port of the computer. Therefore QIRX uses a "driver program" for each hardware it supports, to convert the I/Q data arriving at the USB port into the TCP/IP format and send it to QIRX. All driver programs with their additionally needed DLLs are provided by the installer.
This looks at first glance like a complication, but at second glance opens a flexibility not possible with USB connections.
QIRX supports the following hardware, with the corresponding driver software:
Remark: The driver program must run on the computer where the hardware is plugged-in. Remote scenarios are supported by QIRX. See below.

The picture shows the QIRX Setup entries as pre-configured when first run. The dialog opens on clicking the gearwheel icon on the topmost bar.

The following describes the different fields of the Setup dialog.
Each row corresponds to the settings of the receiver with the number in the leftmost column.
Remark: The dialog can be opened only if all receivers are off. This might change in a future version.

In a "Remote Scenario" the receiving hardware is connected to another computer than the one running QIRX. This might be advantageous for a number or reasons. This remote computer does not run the QIRX software, but one or more instances of the QIRX drivers like rtl_tcp (see above). Whereas QIRX is confined to run on a Windows machine, the drivers are not. Currently the rtl_tcp.exe program is available on Linux, and the RSP2_tcp.exe is also runnable on Linux, although no build exists yet (this will change in the near future).
As a result, people are running e.g. the rtl_tcp on Raspi embedded devices, perfectly suitable for the purpose.
Some examples where such a remote scenario might be useful: The picture shows the settings for a local/remote scenario.

This setup for Rx2 and Rx3 needs some explanation.

"Autostart" means that QIRX should start the corresponding driver program automatically, also in a remote scenario. However, in Windows it is not possible for a program to start another program on a remote machine in the network. It needs some remotely existing communication partner which can be informed to start the requested program.
In QIRX, this partner program is called "StubForRemoteStart". It must be started once, and can be accessed at any time by QIRX (on another computer) and informed to start the requested driver. The communication between QIRX and the "Stub" takes place also via TCP/IP, same remote IP address, but of course another port number as mandated by TCP/IP, the "Remote Starter Port".
The picture visualizes the situation: 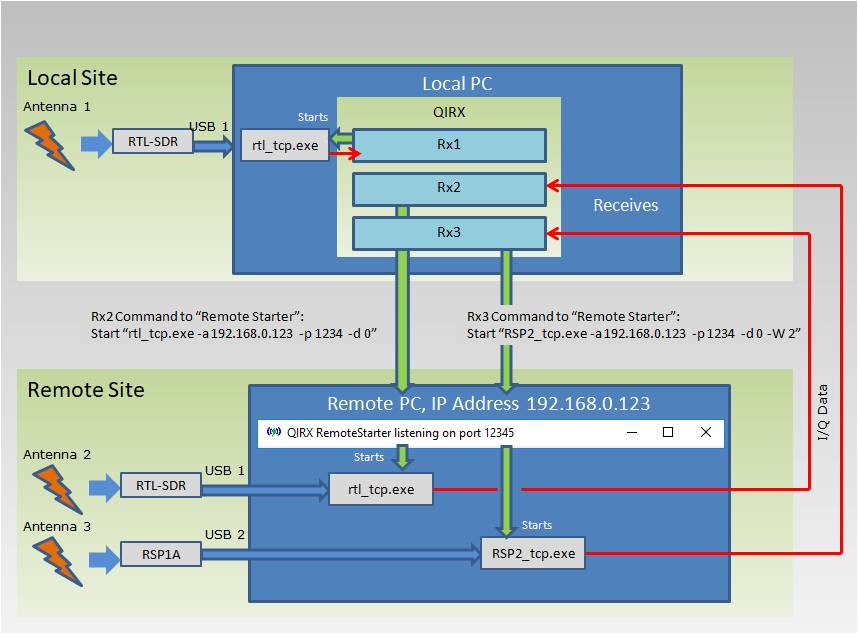 QIRX, when starting receivers from its own "local" site, starts the local I/Q data server ("driver") by just starting their exe with the parameters as entered in the Setup. In our example this is Rx1. On Rx2 and Rx3 however it connects to the "StubForRemoteStart" and sends it the complete pre-prepared strings to start the respective drivers.
After this step there is no difference any more to the local case. QIRX connects to the TCP/IP sockets remotely in exactly the same way as it does locally.

One detail remains though: The "StubForRemoteStart" must be started once, either manually or in some way automated e.g. during Startup of Windows. Of course its TCP/IP socket must know the port number where to listen. This can be set as a parameter on the command line. If omitted, 12345 is used.

Sometimes people want to have more control over their I/Q data servers. They want to start the remote drivers manually. To achieve this, it is just necessary to enter the value of zero into the "Remote Starter Port" field. In that case the complete remote starting process is bypassed, and of course care must be taken to manually provide the remote QIRX drivers with the correct parameters. The setup looks like this:

And the picture visualizes this situation: 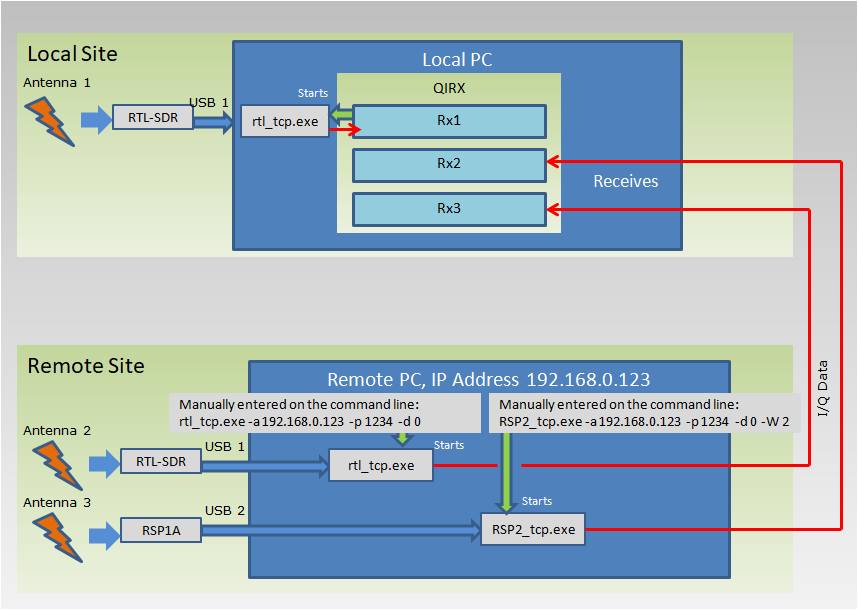 Credit: This feature has been suggested by rundfunkforum user zwhd.