Part I: What are TII Collisions?

Digital Audio Broadcast (DAB) stations very often operate in a so-called "Single Frequency Network (SFN)". In a SFN, they all transmit on the exactly same frequency, timely synchronized, disseminating the same content. Very often not only one, but more transmitters contribute to the decoded audio of the receiver.
At the receiver side, the only means to distinguish different transmitters in a SFN is their TII-Code (TII means Transmitter Identification Information), extracted from the Null Symbol. Unfortunately, this TII Code is not guaranteed to be unique like e.g. the ensemble id, but in certain circumstances it will become impossible to extract the TII Code of a transmitter unambiguously.

Such a situation is what I call "TII Collision".

For an understanding what "TII Collisions" mean, we first need to understand how the TII Codes are extracted from the Null Symbol.

The Null Symbol
The "Null Symbol" is nothing more than controlled silence of 1.3ms. Every 96 milliseconds, a DAB station transmits - nothing -, making a pause to give a receiver a chance to recognize the next starting instance of a so-called "frame". However that pause is not completely silent, because just in there some carriers are activated which form the "TII Code". But before we go into the details of how the TII Codes are constructed, let us first have a look at the Null Symbol.

The Null Symbol in the Time Domain
QIRX can show you the signal amplitude received over some time. The next picture is a QIRX screenshot of the I/Q Data, like from an oscilloscope. The trigger point is the start of the new frame on the right hand side of the picture, adjusted by some delay to get the full Null Symbol into display. "Time Domain" means that the horizontal scale is divided into units of time, however here not in seconds, but in units of sample time. Each sample corresponds to a time of 1/2048000 seconds. Pretty fast, isn't it?
The picture shows the following:

For an explanation how to extract the TII Code consisting of "Main Id" and "Sub Id" we will - in a first step - try to compare the explanation given in the ETSI DAB Standard step-by-step with the spectrum shown above. In a second step it will become clear what it means when we say that "TII Collisions" might be present. Let us collect some properties which might be extracted from the above spectrum, together with some additional information about the organisation of the TII spectrum.

Reading the DAB Standard Explanation
Because a picture says more than thousand words, let us try to find out the Main and Sub Ids of our spectrum by giving an example, constructed from above by applying the given explanation and checking with the DAB standard. 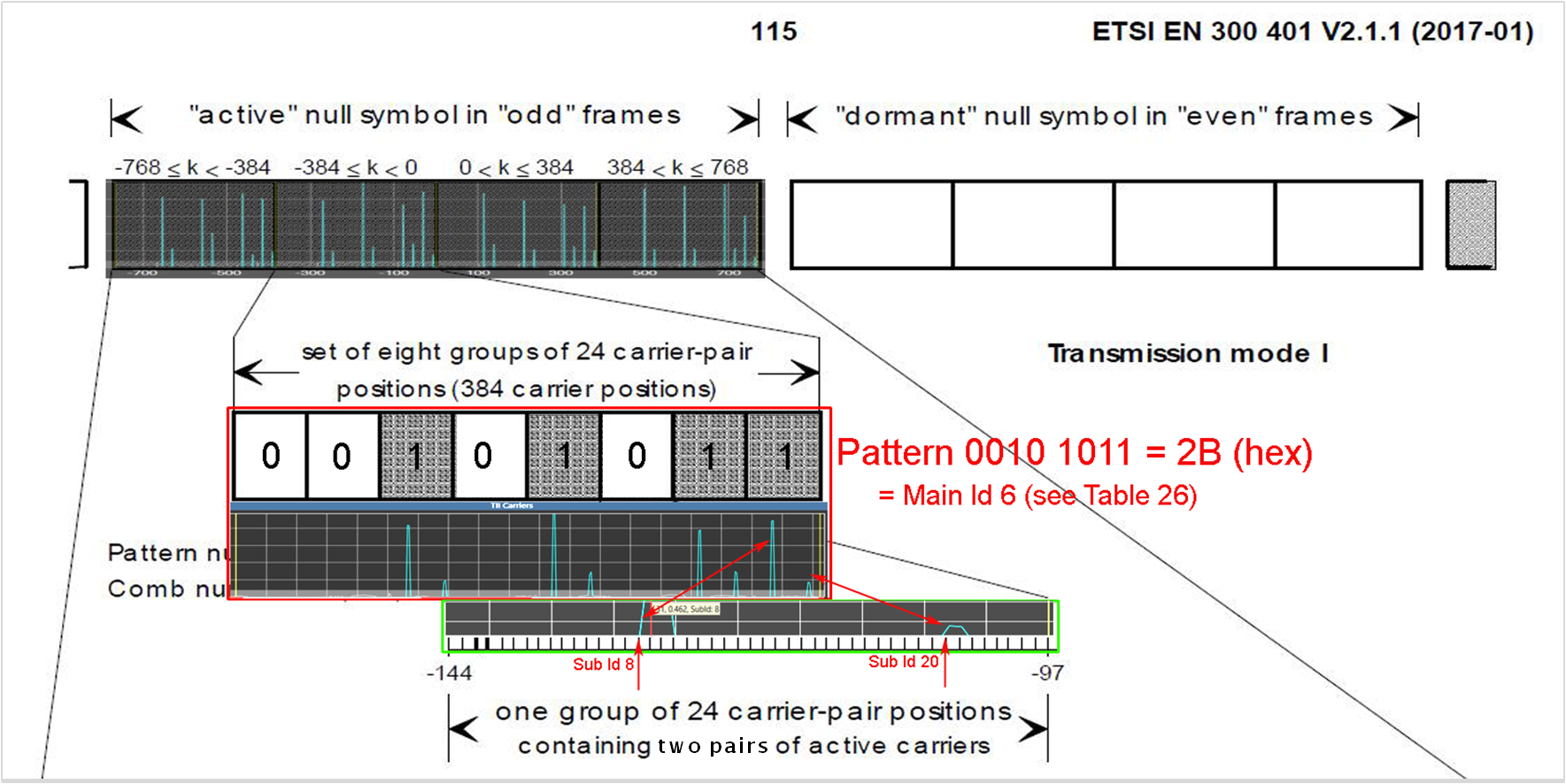 The picture shows the explanation of the TII Codes in the standard, overlaid with the scaled spectra taken as screenshots in QIRX and zoomed to different levels with increasing details from top to bottom.

TII Collisions
With our knowledge how TII Codes work we are now very well equipped to see that by using this scheme freely some problems can arise. We will construct some simple examples consisting of the TII Codes of two transmitters to find out the troublemakers.