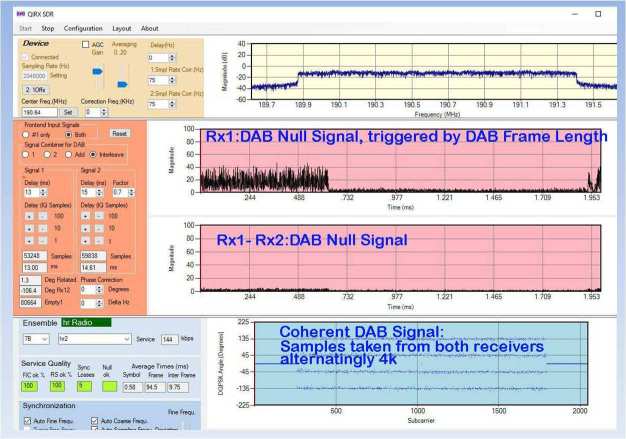 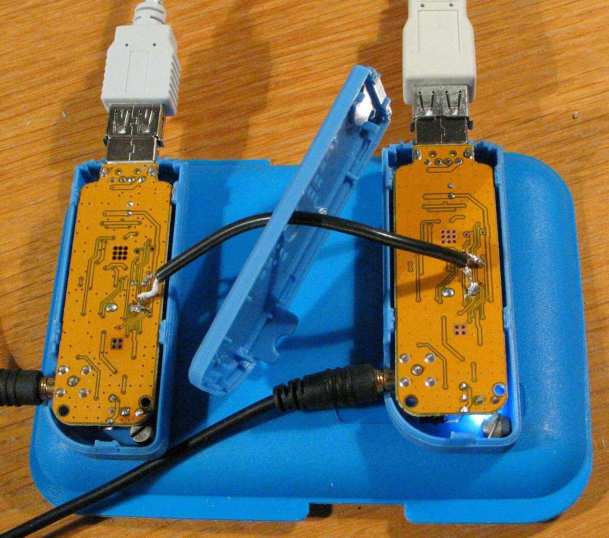 To check the phase-coherence of the two I/Q data streams, a graphical control was used:

The arrival time of the I/Q data has to be exactly equal in both receivers. When starting the experiments, it was assumed that to be “exact” meant the two signals arrived within the time of one single sample, i.e. 1/2048000sec, equaling about 500ns. It turned out that this understanding of “exact” was not sufficient. To achieve arrival-time equality within one sample, the following modifications have been inserted into the QIRX frontend by modifying the time-domain sample streams before entering the frequency domain.

Only viewing the I/Q time domain data, it showed to be very difficult to decide when a zero delay between the receiver streams have been reached.

It might be noted that in a project using phase-coherence this procedure must be automated in some way. 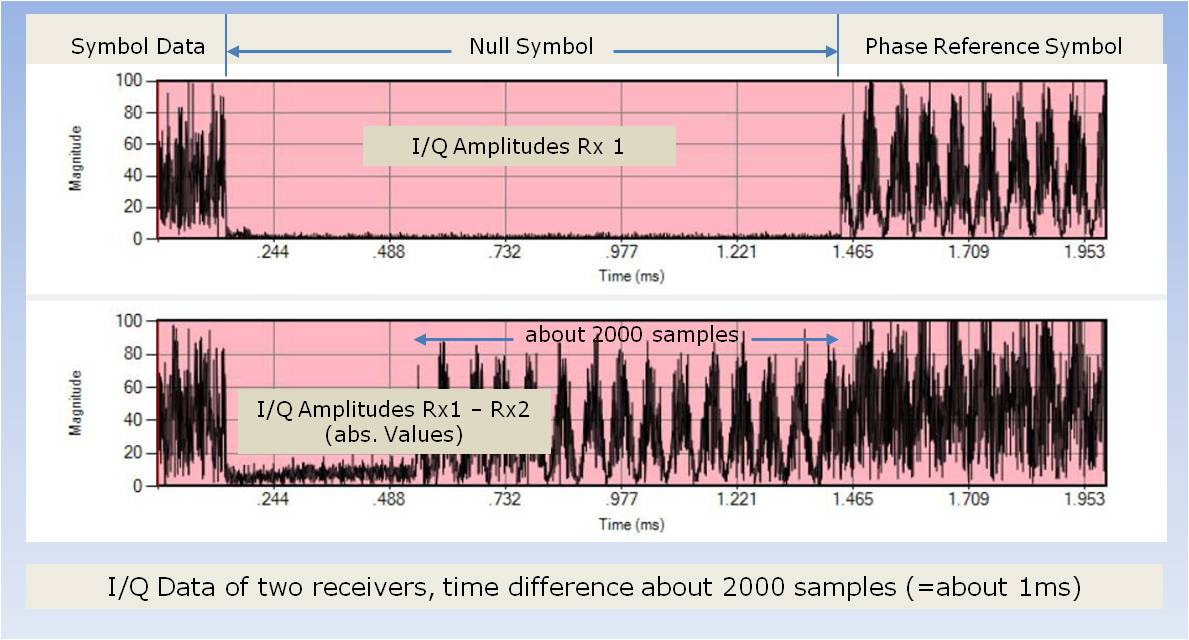 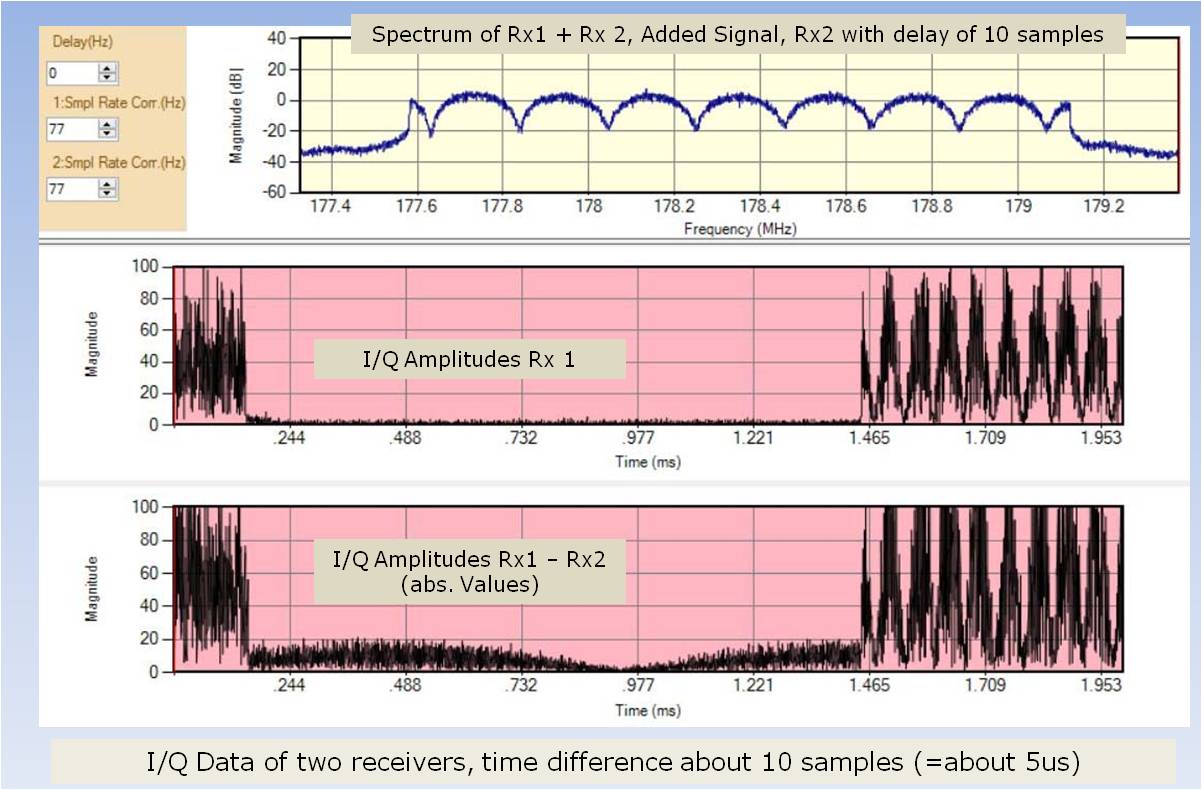 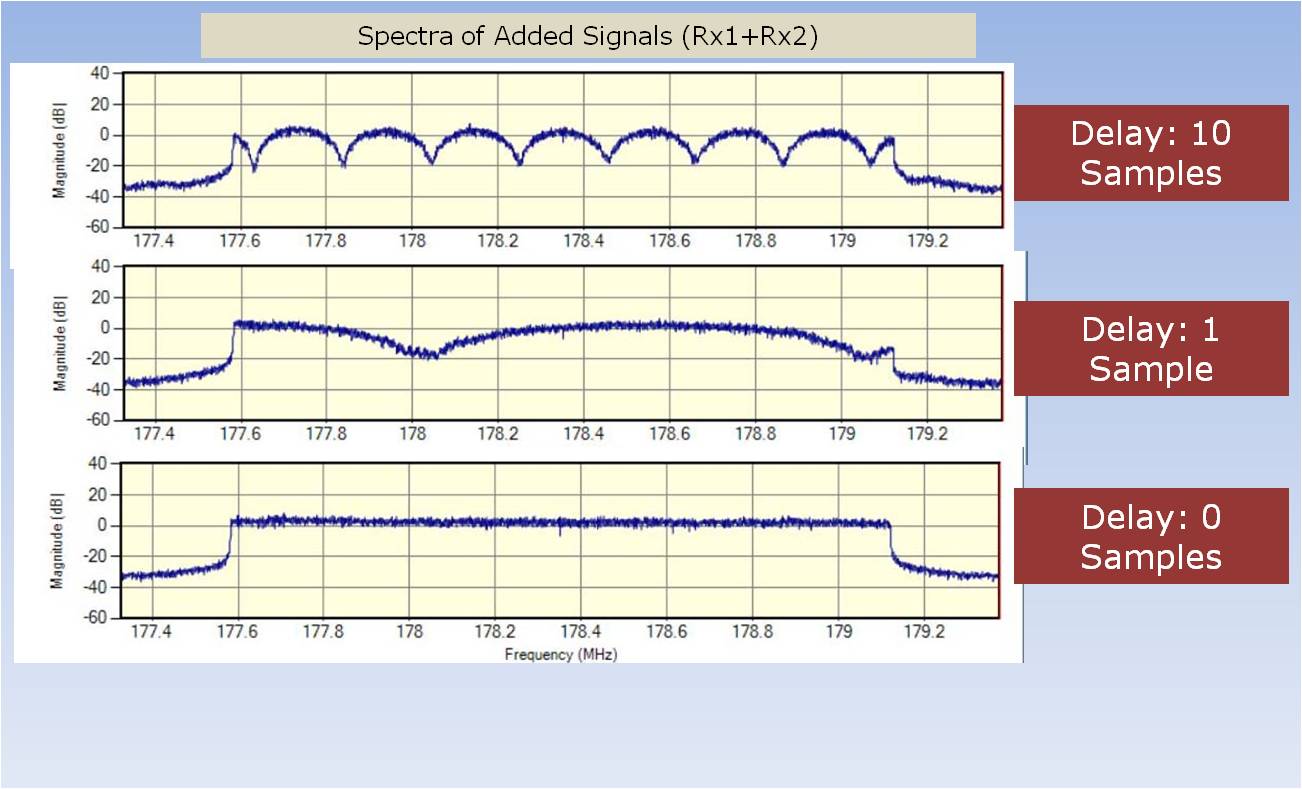 The use of the DAB null symbol in an “oscilloscope” display as shown above will result in a stable and not moving indication only if the sampling rate of the receiver equals exactly 2048000 samples per second, within the accuracy of the transmitter, which is assumed to be very high. This error sampling rate is assumed to be the same as the clock error. In fact, without a sampling rate error correction the time domain display slowly moves as expected and does not stay stable. Although QIRX corrects the sampling rate for DAB in one of its control loops (see QIRX Operating Manual), this cannot be used here, because the DAB processing is coming later in the processing chain of the signal. As a consequence, a sampling rate error correction has implemented in the frontend. The value of the correction is simply selected in such a way as to get a scope image as stable as possible.

In this way, as a side effect, the null symbol inspection allows to measure the sampling rate of a receiver in the sub-Hertz region, the accuracy depending on the time span of the measurement. The granularity of the correction depends on the receiver, assuming that rtl_tcp forwards the given commands without modification. It showed to be correctable in the Hertz region, which again astonishes having the price of the device in mind. 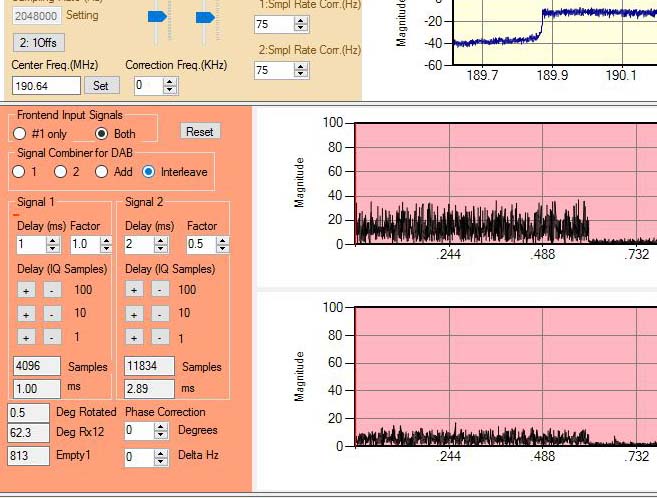 Ideally, after adjustment of the signals for identical amplitudes and for the time delay, both receivers should present the same samples to the software, perhaps with a constant phase difference. The phase of rx2 would then have to be adjusted to minimize the difference signal. As a result, the difference of both should give zero.

Such an “ideal” case is shown in the following figure. 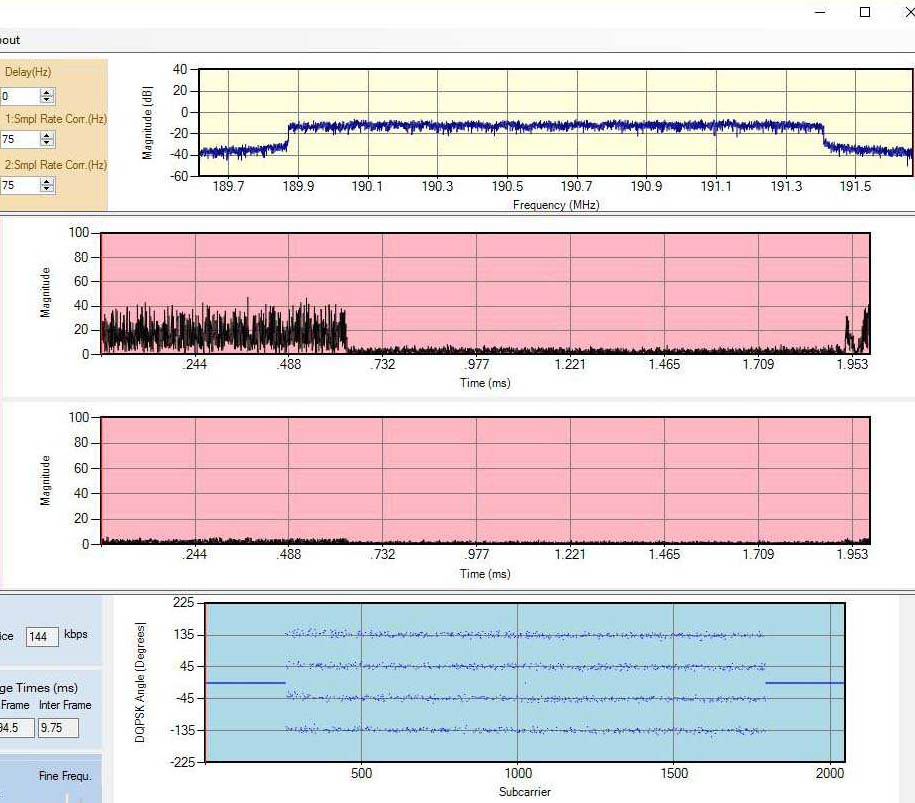 The upper red display shows the null symbol of rx1. The lower red display shows the difference between rx1 and rx2. The difference signal is almost zero, proving the reception of nearly identical samples in both receivers. The signals of both receivers then have been interleaved in such a way to provide alternating 4k samples from each receiver for the DAB. The constellation shows perfect DAB demodulation, “the music played”.

If this picture had been reproducible, then all would have been fine. Unfortunately, this was not the case.

To get a situation like in the "ideal case" shown above, often up to ten attempts were necessary. The main reasons for less than perfect coherence:

1. Sub-sample time delay. In most of the cases, the situation looked similar like the one in the following figure.

The difference signal (lower graph) does not reach zero. Zero difference could not be reached by adjustment of the two signals to the same amplitude and applying a constant phase correction on the rx2 signal. The reason might be that the one sample granularity of the time correction is not sufficient. No attempts to achieve a sub-sample time synchronisation have been performed. The sub-sample time delay (if the interpretation is correct) seemed to be completely random with respect to different runs of the system. In a situation like the one of the above figure, no DAB demodulation is possible.

The strange observation is that with the two dongles only three different rotation speeds have been observed: 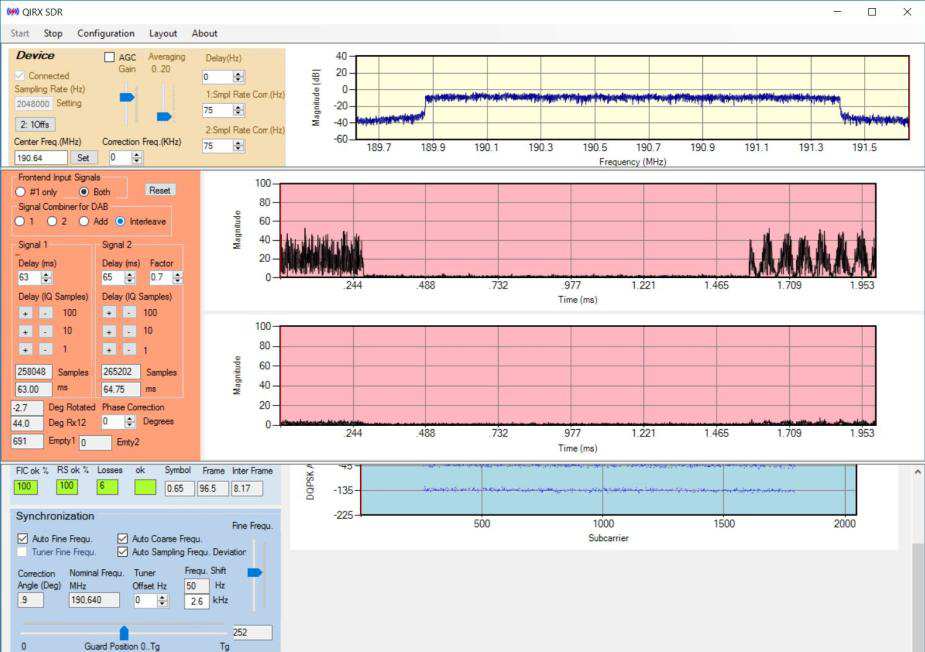 The described experiments with two RTL-SDR receivers running on the same clock have shown severe difficulties to achieve phase-coherence in a robust and reproducible way, necessary for demanding applications like interferometry.

The experiments were to serve as a decision to use coupled cheap RTL-SDR receivers as hardware for possible further projects requiring robust and stable phase-coherence. Although phase-coherence could be achieved with the described hardware setup, the lack of reproducibility (i.e. many attempts necessary) and the occurence of phenomena which are not easily explained (lack of documentation) led to the decision not to use RTL-SDR for such projects, but instead use hardware having been designed with such phase-coherent applications in mind, and being specified for this purpose.

Although we are well aware that the cost of such hardware is many times that of RTL-SDR dongles, the decision is justified in the light of the expected reproducibility and stability of the results.